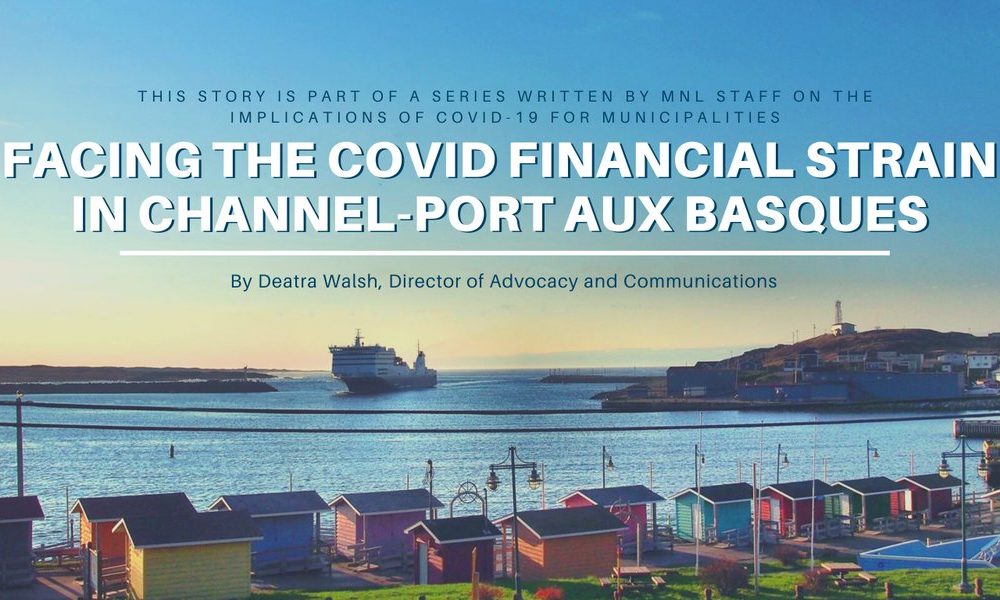 By Deatra Walsh, Director of Advocacy and Communications, Municipalities Newfoundland and Labrador

Ingram, who’s worked with the municipality for 34 years and as the town clerk since 2013, said that they had to bring in outside contractors to take care of the complicated fix. Two days of work came with a with a price tag of over $40,000.

Mayor John Spencer admits that these unplanned events do happen in municipalities. The timing, however, could have been better.

Channel-Port aux Basques is already projecting a deficit of over $550,000 for 2020 and a lot of that is COVID-related.

It’s been a tough year.

The community is a gateway to the province. With the shutdown, the transportation and tourism sector took a big hit. Accommodations and food service businesses closed during the height of the pandemic. It was unclear whether they would reopen. Town council and staff were faced with a difficult decision – charging regular business tax rates or reducing those rates on a case by case basis.

“Where do you draw the line?” Ingram asks referring to how best to proceed when every business circumstance is unique. At the time of the interview, she said that it was still too soon to decide.

Municipalities across the province grappled with business tax decisions, so much so that Municipalities Newfoundland and Labrador (MNL) sought a legal opinion on the issue. The result? Municipalities are not obligated to reduce business taxes but can offer relief with properly developed policy mechanisms in place.

Any reductions mean lost revenue for the municipality.

Lost revenues due to COVID are a common theme across the province and the country. Transportation and recreation are a large part of the equation. People working from home were not using transit. Facilities were closed. Some still are.

The Bruce II Sports Complex in Channel-Port aux Basques, which holds the ice rink, two curling sheets, a six-lane bowling alley, a swimming pool, fitness centre and meeting facilities, closed for most of past 5 months. No programming and rental fees meant no revenue but there were still expenses. As Ingram points out, you must still cover the facility’s operational costs.

“When you lose a revenue portion for that multiplex, then we are left holding a lot,” says Mayor Spencer.

Now in Alert Level 2, aspects of the facility are reopened, with restrictions. Things like the bowling alley remain closed. Given the provincial guidelines in place, Ingram says that is impossible to open it. Other programs and services like day camps, which operate out of the facility, are also not happening.

Safety is a priority for the community. The capacity to deliver services while maintaining safety standards under a COVID reality is challenging. Delivery is also more expensive. While in most years federal summer student position funding could offset some of these strains, Channel-Port aux Basques received funding for fewer positions this year. Where they normally secure 15, they only have three.

Increased COVID expenses and lost COVID revenue are not the only financial things on Ingram and Spencer’s mind.

Residential property value assessments are down across the province. Ingram estimates that this will equate to about $133,000 in losses for the municipality.

Early in the pandemic, Marine Atlantic, one of the major employers in the area, reduced service and issued widespread layoffs. Newfoundland’s southwest coast, known for its mobile labour force, felt the impacts of slowdowns and recession elsewhere. Some of this predated COVID, but with fewer people working out West for example, there are impacts all around.

“I commend our taxpayers,” said Mayor Spencer, “they have been phenomenal in this crisis.”

He says that other communities have been struggling because of the Alberta factor. “People being laid off from high paying jobs –it’s a struggle for people and for the municipalities.”

There are compounding impacts here.

“All municipalities struggle each year to balance a budget and provide the best possible services they can,” says Ingram. “We are also encouraged to take on new projects to stimulate the economy.” But that, she says, also increases your debt load.

In order to apply for and access federal and provincial capital infrastructure funding, municipalities must be able contribute their share. Cost-sharing can range from 10 percent of the project costs to as high as 50, depending on the type of project and the funding stream. Often, municipalities borrow money to cover their portion.

“We are looking at major infrastructure to be done,” says Mayor Sencer. “We are losing revenues. We can’t afford to continue to borrow. We’ve just taken on a big wastewater project and we borrowed for that. Our flexibility to be able to borrow is impacted greatly by this pandemic.”

Municipalities assumed risk before COVID. Now that risk is compounded. As Ingram points out, you need to have the money in place, and you have to prove that you can afford it.

“It’s a big responsibility,” she says.

Channel-Port aux Basques has reserve funds in place to draw upon to support them. But they are the exception, not the rule. MNL asked members about this in their April COVID financial impacts survey. Of the municipalities who responded to the question as to whether they have emergency cash reserves in place, 65 percent said they did not.

Mayor Spencer said they’ve dipped into the reserve to balance the budget – an issue which is a concern moving forward. He adds that this can’t be common practice.  “You can only dip into it a couple of times because you don’t want to bottom it out.”

Municipalities across the province do not want to bottom out as a result of COVID-19. But, as Ingram says, councils also don’t want to see a tax increase either.

Something has got to give, and it can’t be the water main. That’s already happened.